Miss Piggy, a recurring and beloved character in Jim Henson’s “Muppets” universe, has received a Sackler Center First Award from the Elizabeth A. Sackler Center for Feminist Art at the Brooklyn Museum.

“This week moi is being honored — and deservedly so,” Miss Piggy explained in a Time editorial “… Isn’t it wonderful? Isn’t it about time?”

“She is definitely her own self,” Steinem said. “She isn’t trying to be either totally masculine or totally feminine, she’s human.” (WP)

She’s a MUPPET!  (I’ve loved the muppets since the 1970s by the way but a Feminist ICON, this a punk’d right?)

So I guess she’s the first non-human, fictional character created by men, written and performed by men as a Feminist Icon that go around karate chopping people and acting like a Diva! Oh, and the love of her is a Frog, from a swamp!

Wow! are the feminists desperate for an Icon, or do normal humans just not measure up to their Leftist standards anymore?

Miss Piggy is a fictional character. She is a puppet, made of fabric, incapable of original thought. Her original Muppeteer was Frank Oz, and she’s been portrayed by Eric Jacobson since 2002. “Her” first movie and TV show were both written by two men. While she’s certainly a strong-willed character, she’s not real. (Townhall) 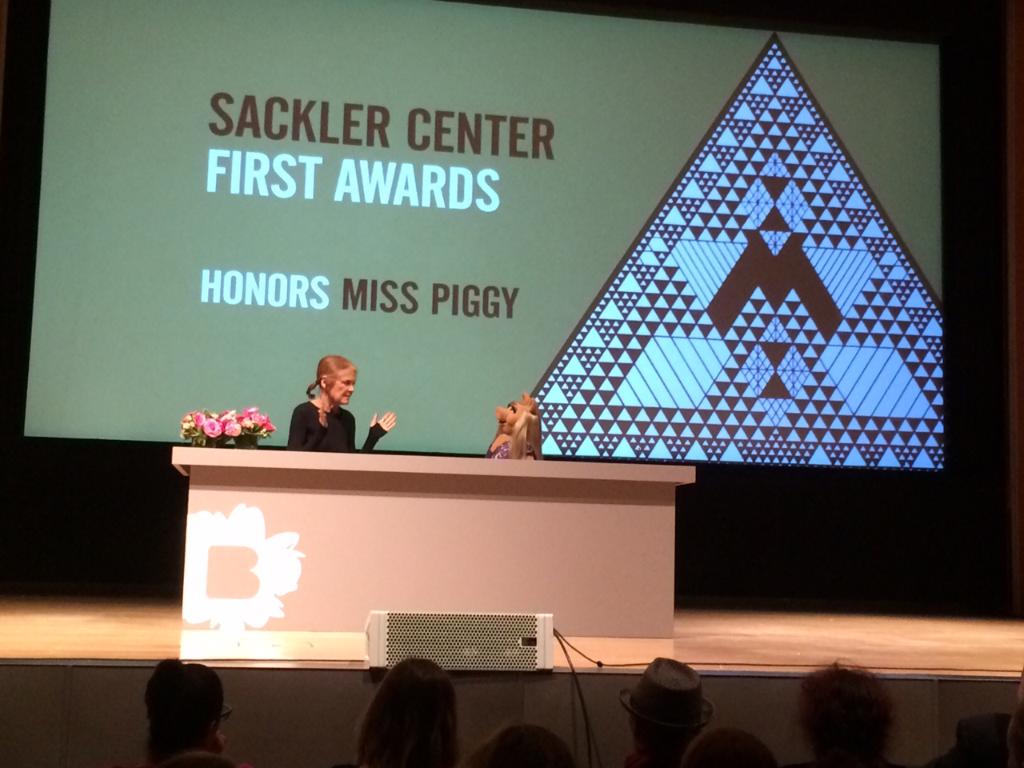 Under the desk top is a MAN with his hand up her puppet parts!

The Sackler Center First Awards, presented by Steinem and Elizabeth Sackler, a historian and activist, “is an annual event honoring extraordinary women who are first in their fields,” according to the center’s Web site.

“She has spirit. She has determination. She has grit,” (she has a man with his hand up her ass manipulating her every move and thought!) Sackler told USA Today. “She has inspired children to be who you are — and this squares very directly with feminism.” (WP)

Come to think of it, Progressives do want to have a hand up your ass and control your every action and every word, so I guess she is the perfect metaphor for Progressives in this day and age! 🙂

When we have so many puppets in D.C., can we really blame progressives for getting confused?

I am woman hear me roar with a man’s hand stuck my ass!! 🙂

P.s. even more cynical note: The Muppet Studio (aka Disney which owns ABC that is also bringing back the Muppet Show) sponsored some kids to come to the awards show.