Since FY 2006, 44 traditionally administrative agencies have spent over $71 million on items like body armor, riot helmets and shields, cannon launchers and police firearms and ammunition, according to federal spending data from watchdog group OpenTheBooks.com.

This comes in addition to the $330 million spent on such equipment in that period by traditional law enforcement agencies like the FBI, Secret Service and Drug Enforcement Administration.

Some examples of the purchases include:

• Over $200,000 on body armor spent by the Environmental Protection Agency during the Obama administration years, versus just $30,000 in the three previous fiscal years.

• More than $28,000 by the Smithsonian Institution on body armor for its “zoo police and security officers” in fiscal 2012.

Again, there’s nothing wrong with police having the best gear to do their job, but one could argue that it’s resources being wasted, given that crime levels have reached record lows. Yes, some parts of the country have seen an increase in their homicide rates, like Washington D.C. and Baltimore, but the nation hasn’t returned to the insane homicide levels of the early 1990s. The EPA is stocking up on body armor? Seriously?

And then there’s the ammo purchases by agencies that don’t need ammunition or “training” with ammo.

Oh and The Golden Globe Awards: A Haven for the Anti-Gun Hollywood Illiterati…

Already happened:bomb-sniffing dogs, redcarpet cleared by security, one man says “did you see snipers on roof?”

Security at check point v intense. Dogs, mirrors under car, had to open all car portals. 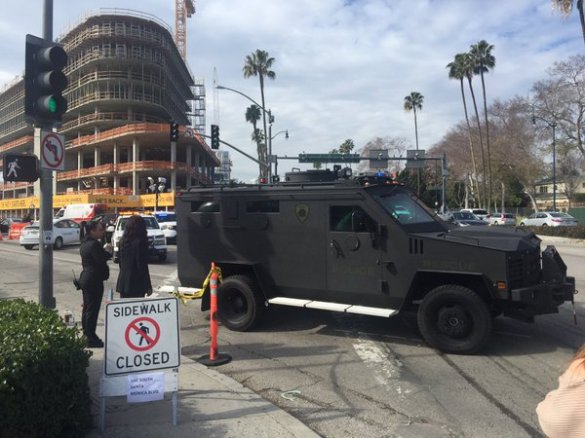 And don’t liberals hate Cops?
For thee, not for me…