The story of health care policy this week, this month and for the last decade (at least) has been a tale of partisan folly. But fear not, this isn’t another earnest pundit’s lament for the vital center to emerge, phoenix-like, to form a governing coalition of moderates in both parties. That’s not my bag.

After all, I have always argued that bipartisanship is overrated.

Bipartisan support often means unthinking support (as the founders could have told you). Partisans may be annoying from time to time, but they also can be relied upon to point out the shortcomings of what the other side is doing. When partisan criticism is missing, it might be a sign that politicians in both parties are helping themselves, not the country. Or, it might mean they’re pandering to the passions of the public and press rather than doing the hard work of thinking things through.

So you’ll get no warm and fuzzy pleading for moderates to scrub clean the word “compromise” so that it’s no longer a dirty word in Washington. Others can make the case for that. And besides, that argument misses the essence of this spectacular failure. Honest partisanship isn’t the problem, bipartisan dishonesty is.

Both parties have become defined by their lies and their refusal to accept reality. It’s a problem bigger than health care, but health care is probably the best illustration of it.

For seven years Republicans campaigned to repeal Obamacare. We now know that for many of those politicians, that pledge was a sales pitch that expired after the sale — i.e., the election — was final.

But before liberal readers pull a muscle nodding their heads: The Democrats aren’t any better. Obamacare itself was lied into passage. “You can keep your plan!” “You can keep your doctor!” “Your premiums won’t go up!” These were lies. If those promises were remotely true, Obamacare wouldn’t be the mess it is.

But these aren’t even the lies I have in mind.

The Republican “repeal and replace” bills debated for the last six months did not in fact repeal Obamacare. They kept most of its regulations intact — particularly the popular ones. The GOP did seek to repeal and reform the Medicaid expansion under Obamacare, but that’s not the same thing as repealing Obamacare.

Yet Republicans insisted it was a repeal because they wanted to claim that they fulfilled their repeal pledge. Actually fulfilling the substance of the pledge was a low-order priority. Heroically winning the talking point: This was their brass ring.

George Orwell Quotes. Political language… is designed to make lies sound truthful and murder respectable, and to give an appearance of solidity to pure wind.

So, too, for the White House. Donald Trump just wanted a win. He has made it abundantly clear that he would sign anything the Republicans sent him — up to and possibly including the head of Alfredo Garcia if someone had written “Obamacare: Repealed” on the poor chap’s forehead. Trump has shown zero preference for any specific policy or approach during these debates. He just wants the bragging rights.

And that is the one thing Democrats are most determined to deny him. The Democrats know that Obamacare has been an albatross for their party. They often acknowledge, through gritted teeth, that the law needs a substantial overhaul.

More important, they also know that the GOP wasn’t pushing an actual repeal. But they couldn’t tolerate for a moment the idea that the Republicans would get to claim it was repeal. So the one thing both sides could agree upon was that this was a zero-sum war over repealing Obamacare — when it wasn’t.

In our age there is no such thing as ‘keeping out of politics.’ All issues are political issues, and politics itself is a mass of lies, evasions, folly, hatred and schizophrenia. George Orwell

This was all about bogus gasconade and rodomontade for Republicans and insecure rhetorical wagon-circling around Barack Obama’s “legacy” for Democrats. If Trump and the GOP agreed to abandon “repeal,” as Senate Minority Leader Chuck Schumer wants, one can only wonder how much replacing of Obamacare Schumer would allow the GOP to get away with.

Likewise, if Democrats could somehow give Republicans the ability to say they repealed Obamacare, many Republican senators — and certainly Trump — would probably be happy to leave the bulk of it intact.

It is this fact that makes the polarized, tribal climate in Washington so frustrating. I like partisan fights when those fights are about something real. The Medicaid fight was at least about something real. But most of this nonsense is a battle of liars trying to protect past lies in the hope of being able to make new lies seem just plausible enough for the liars to keep repeating them. (jonah goldberg)

The very concept of objective truth is fading out of the world. Lies will pass into history. George Orwell
Republicans this week:
https://www.youtube.com/watch?v=YWTJ8iZr7ro&ytbChannel=SunBunz
What they are fighting FOR: 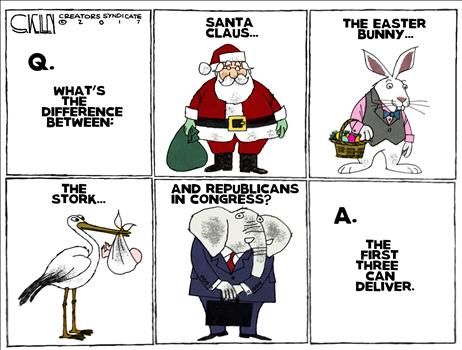 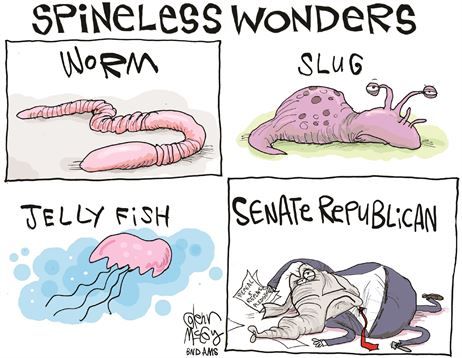