I don’t mean to offend, but I have chronic I.D.D., Intention Deficit Disorder, so I don’t really give a shit. 🙂

But don’t worry, the Russians probably have all the deleted emails anyhow. 🙂 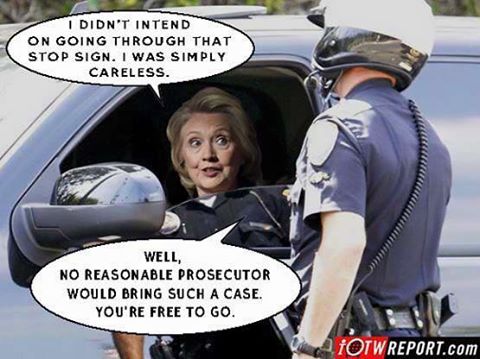 Must remember to try this. But not being Hillary and having an entire corrupt bureaucracy and media behind me I’ll end up in Tent City with all the other peasants. 🙂

Loretta Lynch assured us that she would act accordingly in whatever action the FBI recommended be taken against Hillary Clinton.

Lucky for her the FBI ruled just as she wanted them to, saving her some awkwardness.

That “reassurance” came after it was reported that she had a private meeting with Bill Clinton at an airport last week. She tried to play it off as the two coincidentally running into each-other, when in reality the meeting was planned, and went on for thirty minutes. The general public only knows about it because a local reporter got a tip about the meeting.

Despite Hillary getting off the hook, those involved in the investigation are next in line to feel the heat. The Hill reports:

Lynch is slated to testify before the House Judiciary Committee next Tuesday, the panel announced — her second testimony before the panel since becoming the nation’s top law enforcement official last year. Her testimony will come just days after Republicans have FBI Director James Comey testify on Capitol Hill regarding the FBI’s decision.

“No one is above the law and the American people need to know that federal law enforcement is taking this misconduct seriously,” Goodlatte said in a statement, saying the hearing would also focus on the Justice Department’s handling of the mass shootings in Orlando, Fla., and San Bernardino, Calif., both of which have links to terrorism.

House Republicans are looking to send a clear message: the Clinton email probe is not over. At least five people have been charged over lesser but similar crimes quite recently. The only difference is that their names aren’t Hillary Clinton.

Even if nothing comes from this, Hillary still has a Donald Trump Presidency to worry about. Trump could appoint an Attorney General who could be able to indict Clinton, if he so pleases. If so, that would make history as the first time Hillary Clinton faced consequences for her actions.

“Obviously, no one wants to see any untoward conclusions drawn, and they said they would not do it again,” Hillary Clinton said. I’m sure that’s not the first time she’s heard that from Bill Clinton, either.

“I certainly wouldn’t do it again because I think it has cast this shadow over what it should not, over what it will not touch,” Lynch added on Friday. Notice a theme here? It’s almost like they had — gasp! — coordinated and planned their responses.

Hillary JUST HAPPENED to be on Air Force Once for Obama’s first Campaign stop EVER with her the within days of their meeting and the day after Comey throws himself on his own sword for her.

Nope. Nothing to see there. 🙂

Move on. Get over it.

The Observer spoke to a person who “was on-hand for the entirety of the meeting and some of its aftermath,” and said that the former president had maneuvered the meeting and caught Lynch by surprise.

“According to this source, whose credentials were checked and confirmed by the Observer with sources inside both the FBI and the United States Secret Service, the attorney general was caught completely off guard by the meeting and the source dismisses suggestions that have been raised alleging that she waited there to see Bill Clinton or accommodated his request to see him,” the Observer wrote.

“In fact, it seems from this source that it was Bill Clinton who was maneuvering for face time with the attorney general, because his plane had been scheduled to leave before hers arrived.”

You will Comply, or The Clinton Foundation will pay you a “visit”. Wink…Wink…Nudge…Nudge… 🙂

Let’s be clear. It was a “mistake” that he waited ont he tarmac of Sky Harbor Airport in July for 25 minutes just so he could talk golf and grandkids with the woman was in charge of his wife’s case.

Nope. Nothing to see here.

No even a You Tube Video.

Republicans in Congress are promising the headlines over Hillary Clinton’s email server won’t go away anytime soon. On Wednesday, Republican leaders announced that FBI Director James Comey and Attorney General Loretta Lynch will be testifying on the subject on Capitol Hill over the next two weeks, and additional probes may follow.

Comey will testify in front of the House Oversight Committee on Thursday on the investigation into Clinton’s private email server.

Que: “Partisan Witch Hunt” Meme from the Ministry of Truth… 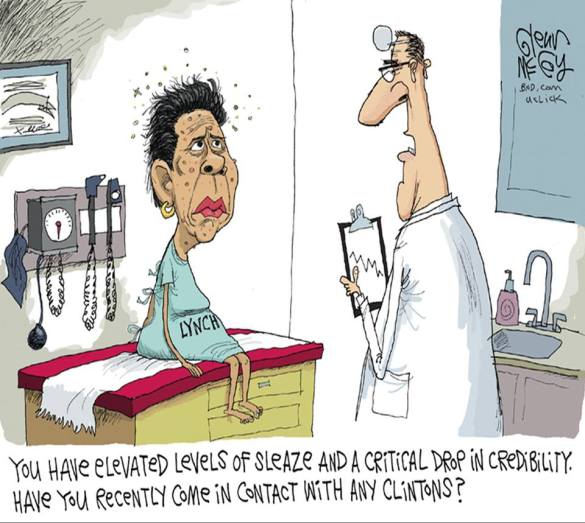