system for fighting global warming. Communist China, she says, is the best model.

back that “Liberalism Caused Global Warming.” I have political evidence that suggests

that he may have even had an empirical point. You see there are two types of

environmental activists. Honest ones believe that the government should assume greater

and places they care about. Dishonest environmental activists (AKA Watermelons*) just

believe the government should get more power over the lives and wallets of the citizenry.

activist. She informs us that Communist China, the world’s leading source of CO2

pollution for several consecutive years since 2007, has the right type of governmental

system to fight Global Warming. This can only bring me back to questioning why

Christiana Figueres calls herself an environmentalist. If she wants to reduce the extent to

which human pollution could potentially warm the terrestrial climate, she should not

pollution on an annual basis. Not only that, they get about 25% as much GDP per ton of

To demonstrate just how wrong Christiana Figueres and her cohorts at the UN truly are,

we look at two pieces of data. The United States Government tracks CO2 pollution by

nation, by year at the Oak Ridge National Laboratory in Tennessee. They are properly

diligent in making this data available to the public. The table below** displays the

The 2010 GDPs in Base Year USD $M for each top 10 CO2 polluter nation follows below.

So to finish walking the dog on this analysis, we can take the GDP and divide it by the

polluter nation’s CO2 emissions***. This allows us to evaluate what trade-off we make

every time one of the top 10 CO2 polluters emits another ton. Lower dollar figures

indicate a greater environmental cost per dollar of GDP produced. It can also allow us to

Japan would have to emit to produce the US 2010 GDP. My own tabulation of this

produced, I would find her obnoxious but impossible to refute. She veers into the

wealth. At the USA’s rate of CO2 pollution, these nations would have emitted 3.8 Million

Tons. At Japan’s rate, they would collectively emitted 2.2 Million Tons; at China’s

Pace Christiana Figueres; the United States needs to learn and do better on this issue.

Contra the dishonest, UN Watermelon Environmentalist, we sure don’t need to be

learning from a Communist dictatorship. If we accepted her prescription, and the UN

was truly correct about CO2 impacts on terrestrial climate, then Watermelon

Environmentalists would cause Global Warming.

*- Watermelon Environmentalist: Behind all the acronyms and the jargon, they say, is a conspiracy to promote a nakedly political aim – anti-big business; anti-free market; pro-tax increases. In short, green on the outside but red on the inside..
** – (HT:HTML.am) for the table source code.
***- We’ll call this our Dead Millibear Index (HT:Al Gore) 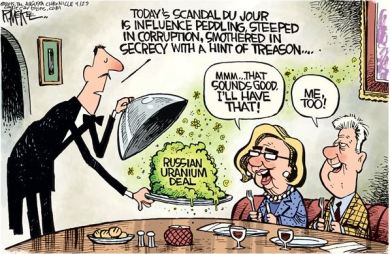